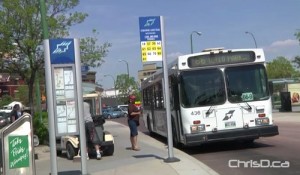 Usually it’s the bus driver being assaulted, but this time police allege it was a passenger.

A 53-year-old Winnipeg Transit driver has been charged after police say he attempted to remove a 23-year-old woman from his bus early Saturday morning.

The incident happened at about 7:30 a.m. in the 500 block of University Crescent when the passenger was approached by the driver for putting her feet up on the seat and cautioned for falling asleep.

The woman was asked to leave the bus, but refused to do so. At that point, the driver reportedly threw her belongings out of the rear door. The victim picked up her items and re-entered the bus, at which time the alleged assault is said to have taken place.

The woman suffered minor upper body injuries and was able to flag down a bystander just before 8 a.m. She fled the bus and police were notified.

The driver was arrested later that afternoon and released on a promise to appear.