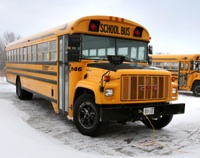 Bus drivers in the Winnipeg School Division may be enjoying an extra long summer holiday when September rolls around.

A spokesperson for the union said a number of the long-standing members felt that the new proposed wage structure would have them earning less than in the previous agreement for the same work.

The union has notified the company and the conciliation officer and hopes that both sides can meet before the contract is set to expire on August 27.