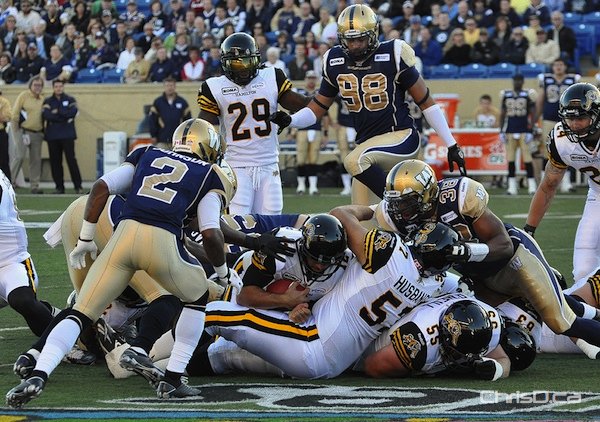 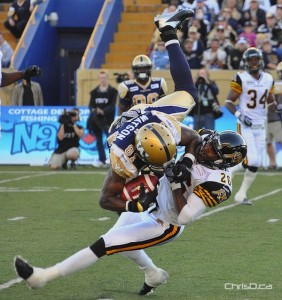 Thursday night the Winnipeg Blue Bombers dominated the turnover ratio 6:0 to capture their second win of the season — a 32-25 see-saw victory over the now reeling Hamilton Tiger-Cats in front of 27,039 at Canad Inns Stadium.

And despite missing a possible tenth-consecutive sellout, the crowd was loud when it needed to be, helping the Blue and Gold offence put together arguably their best performance of the season on the shoulders of third-string quarterback Joey Elliott. 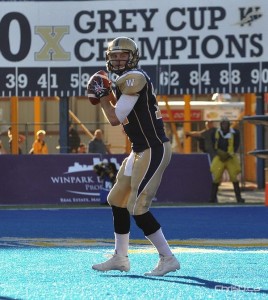 “The offence was clicking,” said Elliott. “It’s good to have the fans behind us, and offensively we got in a groove.”

‘Clicking’ and ‘groove’ are slight understatements as the 26-year-old Elliott racked up 406 yards passing, going 33-of-43 with a touchdown and no interceptions in his first start since 2010.

Big numbers are one thing, but the leadership qualities the signal-caller brings to the table are clear.

It is the first time a Winnipeg quarterback has eclipsed the 400-yard passing mark since Michael Bishop put up 411 against the Montreal Alouettes on October 24, 2009.

“Joey was pretty good tonight,” said an understated head coach Paul LaPolice. “He played very well, and he saw things. Sometimes you have play calls and you say ‘this is where you go with the ball.’ Two times we had that type of call where you go to a certain guy, and he saw something else and he made a play. He did that twice for big gains.”

And while Elliott impressed — and will definitely get the start again in Week 9 — it was the disappointing-as-of-late Winnipeg defence that made several game-changing plays.

Defensive end Alex Hall forced two of Hamilton quarterback Henry Burris’ four fumbles on the night, three of which the Bombers recovered. The most crucial coming late in the first quarter as Burris scrambled toward the end zone in what would have made the game 14-1 for the Tabbies.

“Anytime I can go out there and create a turnover that could’ve potentially been a touchdown is big,” said the standout rookie Hall. “We got (Burris) flustered a little bit, got him out of rhythm. We always talk about creating turnovers. You live and die by turnovers.”

With talk all week about the security of LaPolice’s and general manager Joe Mack’s jobs, the win is more than just victory number two in seven tries. It’s a momentum builder, and something that a struggling team desperately needs with the defending champion B.C. Lions visiting next Friday night.

“There’s always stuff to work on,” added LaPolice before he broke session with reporters. “The team with the best record in the CFL right now has a ton of stuff to work on.”

The Blue Bombers will see exactly what the 4-2 Lions need to work on in a short seven days.