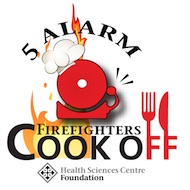 Winnipeg firefighters who have crafted their best recipes will fight a battle in the kitchen today as part of the 5 Alarm Firefighters Cook Off.

The guys will have their delectable dishes judged at the Winnipeg BBQ & Blues Festival at 2 p.m. at Red River Exhibition Park.