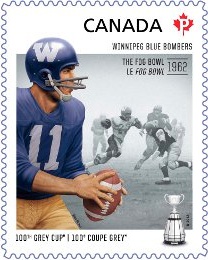 The Winnipeg Blue Bombers’ Grey Cup game of 1962 is commemorated in a new stamp. (CANADA POST)

Canada Post has come out with a new line of CFL stamps to commemorate special moments in league history and honour each team.

The Winnipeg Blue Bombers are featured in the 50th Grey Cup stamp, which went on sale nationwide August 16. Commemorating the game against the Hamilton Tiger-Cats in 1962, the game became known as the Fog Bowl when fog began rolling into Exhibition Stadium and settle on the field. Visibility worsened for both players and fans, and with just over nine minutes left, the game was suspended with Winnipeg leading 28-27. Play resumed the next afternoon with no further scoring and there declaring Winnipeg the winner of that year’s Grey Cup.

Minister of State (Transport) Steven Fletcher and members of the Blue Bombers will take part in a photo-op this afternoon to promote the new collection.