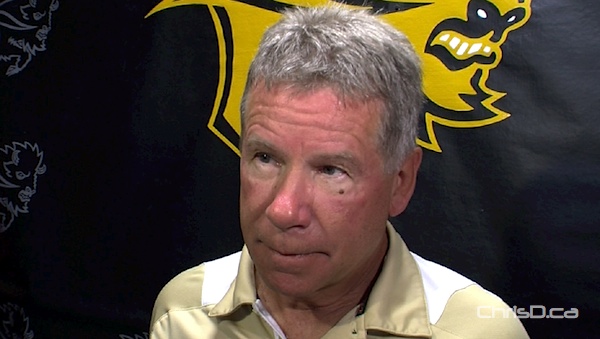 The Manitoba Bisons football team is getting their first shot at pre-season action this weekend with a roster of new players, but there’s a level of uncertainty on who will start.

Head coach Brian Dobie has been grooming his squad for their meet with the Regina Rams on the road Friday night. Fifty-four players are returning for the 2012 season, while 29 new additions make up a handful of rookie spots.

Dobie says the challenge this weekend will be at the receivers position to determine who will start, but also who will take on the role of starting quarterback.

“We’re bringing four quarterbacks with us into Regina. There is a fight for the number one spot continuing, as there is for the number two and three spot.”

The Bisons have about 10 practices under their belt, which has helped Dobie narrow the gap for starters, but as of earlier this week that decision hadn’t been made.

The Bisons will end their training camp with the exhibition game before preparing for their season opener on the road against UBC on September 1. Local fans will get their first glimpse of the Brown and Gold on September 8 when the Bisons host Saskatchewan at University Stadium (2 p.m.).