RCMP’s New Eye in the Sky for Crime Scenes, Accidents

HEADINGLEY, Man. — Manitoba RCMP have added more tools to their arsenal to assist with investigations while getting a bird’s-eye view. 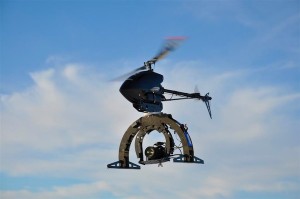 Two unmanned aerial systems (UAS) will be used for aerial photography of motor vehicle collision scenes and crime scenes. One of the units will be stationed in Brandon, while the other will be based in Dauphin.

The technology — valued at about $30,000 — provides police with the ability to capture still photos and shoot video. Each unit is equipped with a high resolution camera strapped to the bottom of what looks like a sophisticated mini-helicopter.

The price of the units will quickly be offset, as the cost to launch a traditional helicopter to capture the same data ranges anywhere from $1,000 to $1,500 per flight.

The unit is controlled by a trained pilot assisted by a payload operator and a safety officer from the ground. A special flight operations certificate was obtained from Transport Canada under the Canadian Aviation Regulations to operate the units under strict regulations.

Similar models are used by the Ontario Provincial Police and other regional police departments across Canada and the U.S.