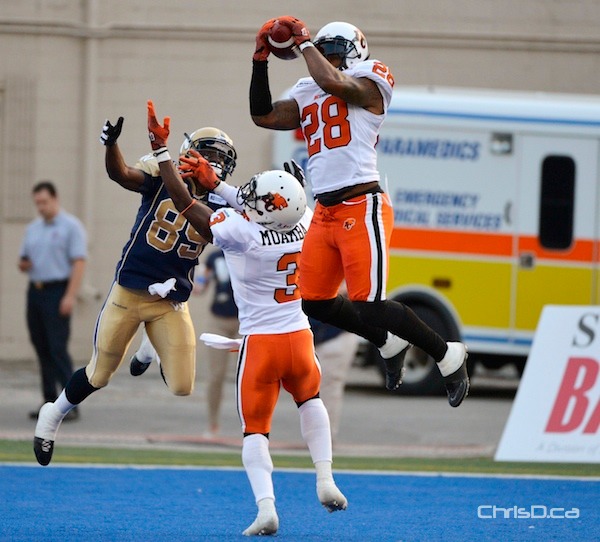 WINNIPEG — Moral victories don’t count for much when you’re in last place, but the Winnipeg Blue Bombers can definitely take some positives away from their 20-17 defeat at the hands of the B.C. Lions on Friday night at Canad Inns Stadium.

When your record is 2-6, keeping it close against the league’s best has to count for something, right?

The Bombers defence, fully healthy for the first time this season, played arguably their best game of the year against a vaunted Lions’ attack, holding them to 339 yards of offence and causing three interceptions. And the Bombers offence did something nobody else has been able to do in over a month — score a touchdown against the Leos.

But a rash of penalties and missed opportunities sunk the Bombers’ ship, allowing the Lions to improve to 6-2 on the year heading into the league-wide back-to-backs beginning on Labour Day.

“There’s not a lot of moral victories in pro football,” said Winnipeg head coach Paul LaPolice. “I told the players that we didn’t play well enough to win. (B.C.) found a way to win the game, and we have to find ways to play better.”

Quarterback Joey Elliott, in his second start of 2012 and coming off a 406-yard passing performance against Hamilton, instrumented several drives at key times. But settling for field goals can be a lucid measure of offensive effectiveness.

“We were able to move the ball offensively, and they’re a heck of a defence,” said Elliott. “They do have a good defensive front. I thought in the first half I had a few mis-reads, we had a few missed pickups that led to quick sacks… we’ve just got to come together. It’s a long game.”

Elliott went 20-for-42 for 256 yards — most of which came in the second half — with no touchdowns and an interception. He was sacked twice and ran four times for 26 yards.

“You’re facing the team that’s statistically number one in almost every category, so I’m sure (Elliott’s) numbers weren’t going to be as good,” added LaPolice. “That’s two weeks in a row he put us in position at the end of the game to win. I’d love to have got a touchdown at the end, but I thought he’s moved the ball well for us.”

But one of the confounding things offensively for Winnipeg was the inability to run the ball effectively despite the offensive line providing their pivot with plenty of time in passing situations. Running back Chad Simpson carried 11 times for just 39 yards, contributing to the team’s 81 total yards on the ground.

“You’re playing B.C. (If) they stop the run early, you have to pass,” said guard Steve Morley. “If Joey’s on, you have to keep throwing the ball because B.C. can score.”

And while the defence kept the potent Lions at bay for the majority of the night — at least until the waning moments when quarterback Travis Lulay and the Leos marched 75 yards for a touchdown to tie the game, and then another 40 yards to set up the game-clinching 41-yard field goal with zeros on the clock — Winnipeg defenders were far from satisfied.

“I don’t believe in moral victories,” said an adamant Brandon Stewart after his first game back from a knee injury. “We need to win the game — period.”

“We did pretty much everything we needed to do,” said defensive back Jonathan Hefney. “We just messed around and gave up one or two plays, and that’s just something we’ll have to go back and look at and see what happened.”

Winnipeg, fortuitously just two points back of third and four back of second in the East, head to Saskatchewan in Week 10 for the first matchup of their annual home-and-home series against the struggling Riders starting on Labour Day.