Home » Entertainment » Broadway to Glisten with Parade of Lights

Broadway to Glisten with Parade of Lights 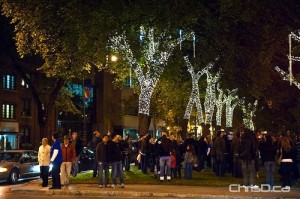 Broadway will be lit up brighter than during Christmas on September 8.

The Downtown Winnipeg BIZ’s Lights on Broadway, which now runs in conjunction with the larger ManyFest festival, will see cyclists and pedestrians pick up candles to light up the street as they pedal/walk around the festival. Prizes for the best lit-up bike or individual will be awarded.

Cycling enthusiasts will be making the rounds in the coming days to raise awareness of the event at several city parks.

“Broadway is one of Winnipeg’s most prized gems, and a source of pride for many Winnipeggers alike,” said Stefano Grande, executive director of the Downtown BIZ. “People will get a chance to celebrate Broadway in a unique and innovative way — by lighting up the medians with various applications of light — in our inaugural living Parade of Lights.”