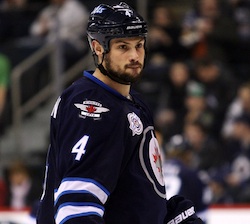 Winnipeg Jets defenceman Zach Bogosian went under the knife Friday to correct an injury in his right wrist. And thankfully, the surgery was a success.

The team released a statement from Jets head physician Dr. Peter MacDonald following surgery at the Cleveland Clinic of Ohio:

“After speaking with Dr. Thomas Graham this morning, surgery on the chronic ligament tear in the right wrist of Winnipeg Jets defenceman Zach Bogosian was successful. The prognosis for a return to hockey from this type of surgery is typically between four and six months.”

Jets GM Kevin Cheveldayoff was also pleased with the outcome, saying he looks forward to the 22-year-old’s return to Winnipeg.

“While we are disappointed Zach will be out for an extended period of time, we look forward to getting him to Winnipeg to begin his rehab with our training staff and getting him back on the ice as soon as possible,” Cheveldayoff said.