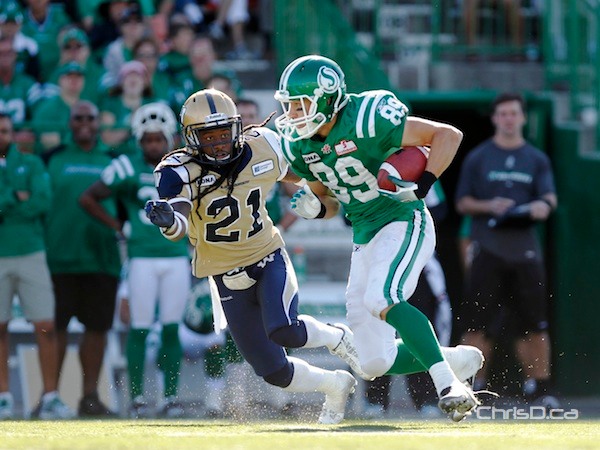 Saskatchewan Roughriders slotback Chris Getzlaf (R) runs up the ball while trying to get away from Winnipeg Blue Bombers defensive back Alex Suber during the second half of the Labour Day Classic in Regina on Sunday, September 2, 2012. The Roughriders won the game 52 – 0. (DAVID STOBBE / REUTERS) 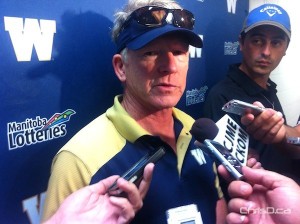 REGINA, Sask. — There must be something in the Regina water.

Or maybe the late August and early September field stubble burning in the central prairies just smokes out any of the plans the Winnipeg Blue Bombers try to put together every year in an attempt to end their epidemic drought of success in the Labour Day Classic.

And it seems to get worse year after year, as the Bombers dropped their eighth consecutive at Mosaic Stadium by a ridiculous 52-0 margin to the West Division’s last-placed Saskatchewan Roughriders on Sunday afternoon.

“They know we haven’t won here since 2004, so they’re fully aware of the struggles we’ve had,” said veteran receiver Terrence Edwards of educating his younger Winnipeg teammates of what was to be expected in the biggest non-playoff game of the year. “We want to be the team that breaks the streak, but we’ll never win a game again if we play like that.”

Winnipeg was absolutely atrocious from the get-go — outplayed by the Riders in utterly every facet known to the game of football. Beyond scrounging together a measly 102 yards of offence  — 32 coming on the final drive of the game when it was already an embarrassment — Saskatchewan blocked punts, returning one for a touchdown, recovered bobbled Bombers punt returns, ran, threw, caught, out-hit and out-played their opponents in every which way imaginable.

“I can’t think of any aspect that we won,” said Winnipeg head coach Tim Burke after his debut as a professional bench boss. “We’ve got a lot better talent than our record shows. We have got to find a way to dig down deep and pull out the best performances we can… week after week after week.”

“Each individual has got to find a way to play the best game of their life — every week.”

It sounds like a tall order. And it is.

But when it comes down to it, this team just can’t keep things close in the majority of their trips to Regina. Regardless who’s coaching.

“When you have a young team, sometimes it’s just hard to adjust.”

Winnipeg quarterback Joey Elliott finished the game 9-of-19 for 61 yards and an interception. He was replaced by Alex Brink in the fourth quarter and went 5-of-7 for 35 yards.

Bombers running back Chad Simpson carried the ball eight times for 34 yards; a respectable 4.3 yards-per-carry. He also lead the team with four receptions.

The Blue Bombers were last shutout in 1969. It was a 33-0 loss in the season opener at home vs. Edmonton.