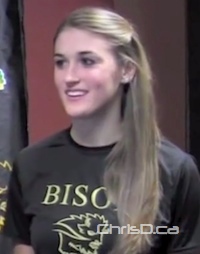 Pischke, a 6’1″ left side hitter with the Bisons’ women’s squad, and her partner Melissa Humana-Paredes of Toronto, made it to quarter-finals among 30 teams at the championship. The duo played a close game against Brazil on Saturday that lasted 43 minutes and ended with a 24-22 victory in their favour.