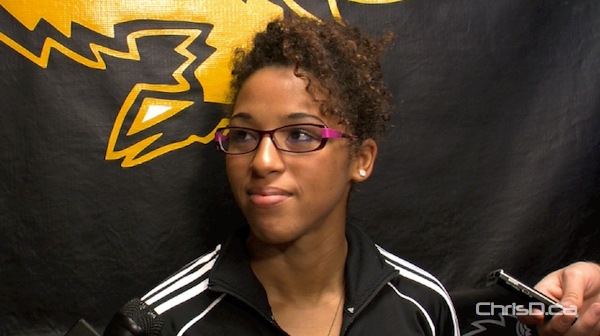 Former University of Manitoba Bisons soccer player Desiree Scott is returning to her team after a whirlwind experience at the 2012 Olympics in London.

The midfielder won bronze as part of Team Canada earlier this summer and has been making the publicity rounds ever since.

Now that the hype has settled down somewhat, the 25-year-old is looking forward to returning as an assistant coach as the Bison women begin their 2012 season.

Scott will be assisting the team as a whole, but says her specialty remains at the midfielder position, where she’ll use her knowledge gained over the past year or so to benefit the players in that position.

Scott credits being part of the CIS to landing on Team Canada’s radar in the first place and helping to propel her Olympic career, saying that a rigorous training schedule was also the key in making it to the Olympics.

“It definitely helps your development. You have to appreciate the CIS and the five years that you get and hopefully I’ll be able to help them (the team) with that,” Scott said.

With the introduction of a University of Winnipeg soccer program across town last week, Scott also said a friendly rivalry during her Bison-playing days would have been good for the sport.

“That would have been awesome, actually. That rivalry is going to be an important thing for the game and for the CIS.”

As for the future, Scott plans on making a full-time career out of coaching with the Bisons when her professional playing days eventually come to an end. But that will have to wait until after she and Team Canada attempt to grasp a gold medal at the 2016 Olympics.

The Bisons open their 2012 regular season Friday at 6 p.m. at the Winnipeg Soccer Complex.