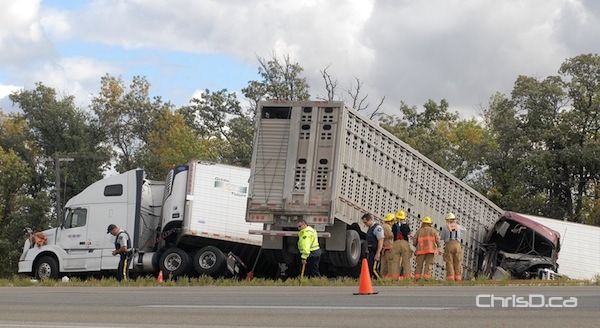 Two semi-trailer trucks were involved in an accident on Highway 1 west of Winnipeg on Thursday, September 6, 2012. (STAN MILOSEVIC / CHRISD.CA)

The accident happened near St. Francois Xavier at about 1:30 p.m. when one of the trucks stopped because of a leaking fuel line. A fire truck from the RM of St. Francois Xavier responded, when it was hit by another semi about 45 minutes later. The impact of the crash threw two fire personnel and one RCMP officer on scene to the ground.

The driver of the first semi-tractor trailer, a 65-year-old man from Ontario, was not injured. The RCMP officer and the two fire personnel suffered non-life threatening injuries.

The driver of the second semi, a 29-year-old Steinbach man, received care from an off-duty paramedic who came across the scene. The driver was air lifted to hospital by the STARS air ambulance and was last reported in critical but stable condition.

Motorists were advised to avoid the area as the eastbound lanes were closed for several hours.

Two semi-trailer trucks were involved in an accident on Highway 1 west of Winnipeg on Thursday, September 6, 2012. (ALISON ZULYNIAK / METRO WINNIPEG)