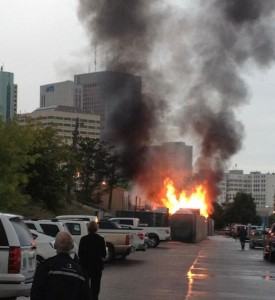 Flames shoot out from a storage area at The Forks containing the warming huts. (BRENT JASON / TWITTER)

A fire Thursday morning damaged the warming huts being stored next to the Via Rail station at The Forks.

The blaze began just before 8 a.m. near Waterfront Drive. Smoke from the fire could be seen billowing over downtown Winnipeg as crews tackled the flames.

The warming huts are creative structures designed by local and international teams of architects that keep skaters warm along the river trail during the winter months.

This is the latest such fire to take place on The Forks’ property in recent months. A fire on April 24 destroyed several boat docks before stored near the Norwood Bridge. On April 30, a similar fire was set in the same location.

A cause of the latest blaze and a damage estimate aren’t yet known.

← Previous: Bisons' Nic Demski Opens Season with a Bang Next: Woman in Stable Condition After Being Hit by Car →
Tags: Fire | The Forks