Home » News » Lord Selkirk Presented with Key to the City

Lord Selkirk Presented with Key to the City 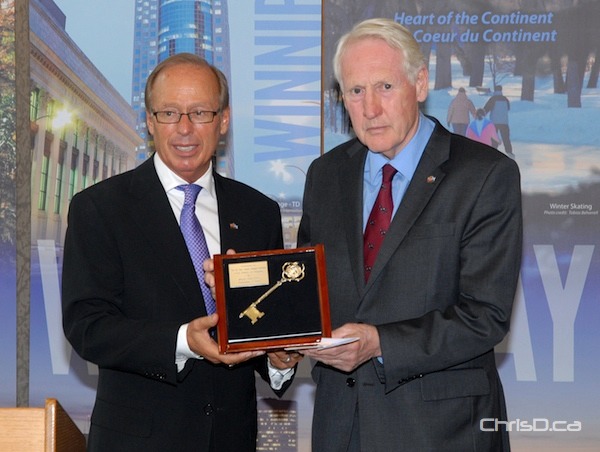 Mayor Sam Katz presents Lord Selkirk of Douglas with the key to the city during a ceremony at City Hall on Friday, September 7, 2012. (STAN MILOSEVIC / CHRISD.CA)

Winnipeg Mayor Sam Katz presented the key to the city to Lord Selkirk of Douglas on Friday.

The lord is visiting Winnipeg to mark the 200th anniversary of the arrival of the Lord Selkirk Settlers.

Known as Selkirk settlers, these families established permanent residence along the banks of the Red River, in what is now part of the city of Winnipeg.

“Winnipeg owes its cultural diversity to the fact that people from all over the world have looked to this land as a place of hope and opportunity,” Katz said in a release.