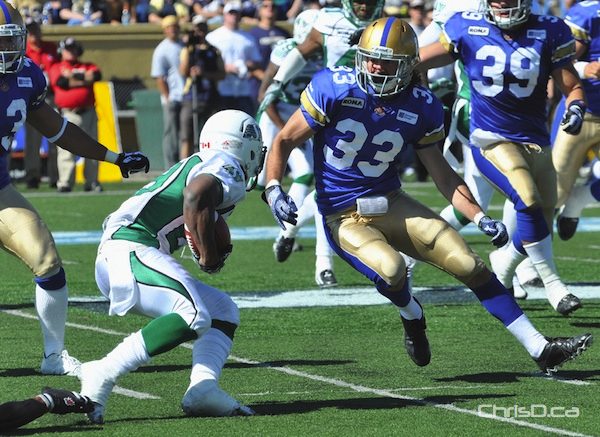 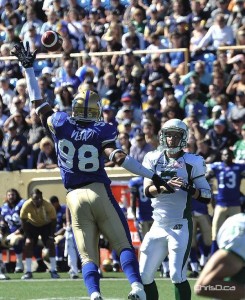 WINNIPEG — It was a chance for some serious redemption after one of the worst losses in franchise history, but the Winnipeg Blue Bombers came up just short in the 2012 Banjo Bowl, losing 25-24 to the Saskatchewan Roughriders on a last-second field goal.

And while costly penalties at key times definitely hindered the Blue and Gold, a game-changing decision made by rookie head coach Tim Burke came with just under a minute to play.

Leading 23-22 with 55 seconds remaining in the game, the Bombers elected to punt the ball from the Riders’ own 36-yard line, in an attempt to pin Saskatchewan deep with precious time dwindling.

Punter Mike Renaud ended up kicking it nowhere near the sideline and through the end zone for the single to make it 24-22 Winnipeg. It immediately gave the Riders the ball on the 35, where they marched 43 yards on four quick plays to set up a 40-yard Sandro DeAngelis field goal for the victory.

“I’ll be honest. In retrospect, I should have kicked the field goal,” said Burke of his critical decision. “It was 42 yards with the wind. I should have just kicked it. I played it too conservative.”

“The way our defence was playing I thought we’d hold in there.”

And while the Bombers held in there with a team that walloped them 52-0 just seven days earlier in the Labour Day Classic in Regina, the offence is still struggling, having not scored a touchdown in nine quarters of football.

“I wouldn’t say we did a good job. We improved in some areas,” said veteran left tackle Glenn January. “Regardless of their record, their defence is fairly good. They’re one of the better pass-rushing teams in the league… I felt like we did a pretty good job in some crucial situations, but you know, it’s obviously not enough. Whenever we get in the red zone, we have to get touchdowns and not field goals.”

On paper, the offence appears effective as quarterback Joey Elliott went 19-of-33 for 241 yards in his sixth career CFL start, while running back Chad Simpson rushed nine times for 74 yards for a very solid 8.2 yards-per-carry average, and added 29 yards receiving.

The Winnipeg defence folded when needed the most, but put up a relatively decent stat line despite allowing backup quarterback Drew Willy and the Riders offence to total nearly 300 yards of offence after starter Darian Durant left the game late in the opening quarter with a hip injury.

Mainor could have completed the hat trick along with Vega, but chose to take a bewildering penalty by tossing Willy into the turf after driving him back nearly 20 yards on his feet.

“We just can’t have this anymore,” said Burke of his team’s continued issues with committing costly and avoidable penalties. “Maybe we’ve got to sit some guys who don’t have the brains enough handle these situations.”

Winnipeg’s season looks lost at this point, sitting at a league-worst 2-8 and deep in the cellar of the CFL East Division.

View the photo gallery below from the Banjo Bowl.