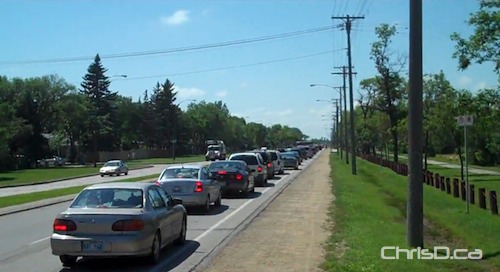 According to local freelance photographer Howard Wong, “Transit control just stopped all buses from leaving the Osborne garage. They do not want to add to the gridlock”. He later said that the phrase he heard used over the scanner was “a dog’s breakfast”. Even city councillors were not immune from the chaos, dubbed “Carmageddon” by social media users.

“I was stuck in it too for one hour,” related Transcona Councillor Russ Wyatt.

According to an unnamed “city operator,” a sinkhole in Wyatt’s own ward caused a “ripple effect” that set bus schedules back an hour. “The problem began with a sink hole reported at 4 p.m. on Route 87 that closed Dugald Road east of Symington Road”, reported the Winnipeg Free Press.

However, Public Works Committee chairman Councillor Dan Vandal (St. Boniface) was instead advised the problem started in the ward neighbouring those of the two councillors, East Kildonan.

“I am told that the gridlock was a result of the closure of a lane on northbound Archibald at Nairn. It backed up the downtown. The city staff are looking at expediting that issue today (Friday). Also cars park on southbound St Mary’s Road (in St. Boniface ward) immediately at 5:30 p.m., so when traffic is slower than usual from downtown this makes the situation worse. And, of course, summer is over and people are back at work… elevating the traffic counts which contributed…”

Strangely, the Winnipeg Transit Twitter account (@transitalerts) made no mention of gridlock at all on Thursday afternoon, and the official response to our subsequent inquiry did not mention the Transcona sinkhole, while denying buses had been dry-docked.

“A return to regular seasonal traffic volumes led to higher than recent traffic in the downtown in the afternoon yesterday (Thursday),” said a city spokesperson. “This, combined with existing construction and a lane closure on Archibald at Nairn, cause a back up in traffic into the downtown. Dispatching of buses from the transit garage would not be affected as buses can enter traffic via Osborne or various points of the Transitway.”

Councillor Jeff Browaty (North Kildonan) pointed out the road renewal work on Osborne, Donald, Broadway and Corydon exacerbated southbound grief, stating, “Is this somewhere where we should be doing evening and weekend work? I will support that when it comes to council in September.”

And a viewer of “City Circus” wondered why there was no mention anywhere of the construction bottleneck at the Main Street underpass, where the single lane northbound resulted in a line-up to Portage and Main.

Meanwhile, transportation analyst and consultant Phillip Walding disputed the “official,” limited account, of the problems, and questioned why there was no acknowledgement in city statements that the gridlock on Thursday was city-wide and not only for traffic heading eastbound from downtown.

“Traffic was backed up in every direction from downtown, plus Archibald, plus Market Square east of Main, plus Logan and Keewatin. Reasons?

Walding, a former general manager of Duffy’s Taxi with over 25 years experience in the taxi and Handi-Transit industry, lamented, “This is city planning as we know it,” and blamed City Hall for laying the groundwork that resulted in Carmageddon. He also criticized the response from the city’s 311 service and Cadets to the crisis.

“I called 311 about the lights out on Logan and Keewatin and of course spent 30 minutes on hold before I gave up,” Walding said.

“I actually went through the corner twice about 25 minutes apart and even though when I went through first the lights had already been out for a while (based on the traffic backup), there were still no cadets directing traffic when I went through a second time. My dispatch told me the lineup was back to Sherbrook on Notre Dame. After I finally got through that mess I arrived downtown and noticed eight cadets arresting someone whom I suppose had caused a disturbance at the Timmy’s on the corner there — which I guess holds precedence.”

Walding concluded, “And our chief planner gets $136,000 a year ? It’s a good thing Disraeli was not closed for 16 months — can you imagine that on top of it. There would be people still trying to get home from Thursday.”

Marty Gold is the host of “City Circus” on Shaw TV, Winnipeg’s only television program about politics, as well as the voice of “The Great Canadian Talk Show” podcasts.