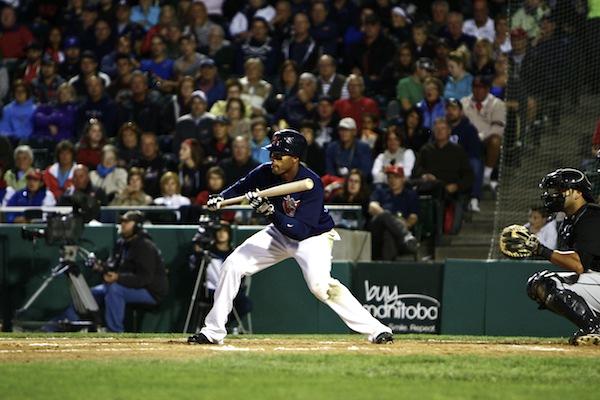 Winnipeg Goldeyes’ outfielder Chris Roberson pulls in for a bunt during the
opening game of the championship series at Shaw Park on Tuesday, September 11, 2012. (TYLER PEACOCK / METRO WINNIPEG)

WINNIPEG — The Winnipeg Goldeyes won their first playoff game in the American Association championship series over the Wichita Wingnuts on Tuesday night.

Playing in extra-inning action in front of 5,117 fans at Shaw Park, the Goldeyes secured a 5-4 win in the 10th inning.

Barbaro Canizares hit a fastball from Wichita Wingnuts’ reliever Josh Dew to seal the victory and hand Brian Beuning his first win of the post-season. It also gave Winnipeg a hard-earned victory after a tremendous Game 1 of the best-of-five American Association final.

“He got a pitch he could handle on a 3-0 count and we knew he had the green light,” said left fielder Kyle Day. “The guy is a great hitter and if he gets a pitch he can drive, he can hit it a long way.”

Game 2 of the series continues tonight at 7 p.m. Tickets remain available at the Goldeyes box office and Ticketmaster.

— With files from Scott Taylor