Home » Sports » Goldeyes One Win Away from Championship

Goldeyes One Win Away from Championship 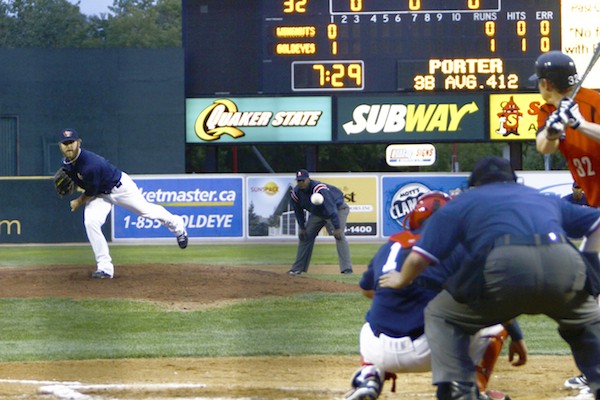 WINNIPEG — The Winnipeg Goldeyes are one win away from winning their first championship since 1994.

The Goldeyes defeated the Wichita Wingnuts 7-3 Wednesday night in front of 5,886 enthusiastic fans at Shaw Park. With the win, the Fish grabbed a 2-0 lead in the five game American Association Championship Series, and head to Wichita needing only one win to clinch a title and give the city of Winnipeg its first professional sports championship in 18 years.

“We were all out just playing our hearts out,” said Salamida. “I was just trying to throw in the strike zone so our guys could get outs. I wasn’t going for strikeouts but good things happened tonight.”

Salamida said he knows how much the Goldeyes want this championship and it is showing in their level of play.

“Every guy wants it more than the next and guys are playing for each other and just battling right now. We’re excited to get down to Wichita. We want to close this thing out.”

The Goldeyes got the scoring going in the bottom of the first when a wild pitch to Josh Mazzola by Wingnuts starting pitcher Ryan Hinson allowed Yurendell de Caster to get home from third base.

Wichita got back in the game in the second when Jesse Mier smacked a three-run home run over the wall in left field to give the Wingnuts a 3-1 lead.

Winnipeg loaded the bases in the third inning and Hinson walked Josh Mazzola allowing Amos Ramon to get home making the score 3-2.

The Fish took the lead back in a big way in the sixth inning when Ramon smacked a three-run home run over the left field wall putting the Fish up 5-3 and igniting the Shaw Park crowd. Ramon had a strong offensive game putting up two hits and three RBI’s.

“We settled down and played a great baseball game in the last six innings,” said Goldeyes field manager Rick Forney. “Seems like the right guys came up at the right times and they delivered for us.”

Salamida got the win for the Fish while Brian Beuning picked up the save.

Game three of the championship series is Friday at 7:05 p.m. in Wichita, with games four and five, if necessary, going down Saturday and Sunday.