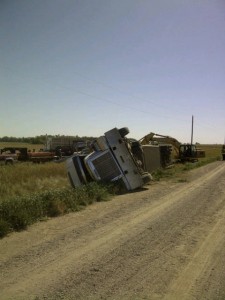 A semi-trailer truck hauling cattle rolled near Brandon on Friday, September 14, 2012. The driver was taken to hospital. (BRANDON RCMP HANDOUT)

A semi-trailer truck hauling cattle rolled into the ditch southeast of Brandon on Friday.

RCMP say the crash happened shortly after noon on Road 103 West in the RM of Cornwallis.

The driver of the semi moved to the side of the road to make way for an approaching vehicle, when his truck slid of the edge and tipped onto its side.

The male driver of the semi was taken to hospital with undetermined injuries.

The condition of the 64 head of cattle being transported isn’t known.