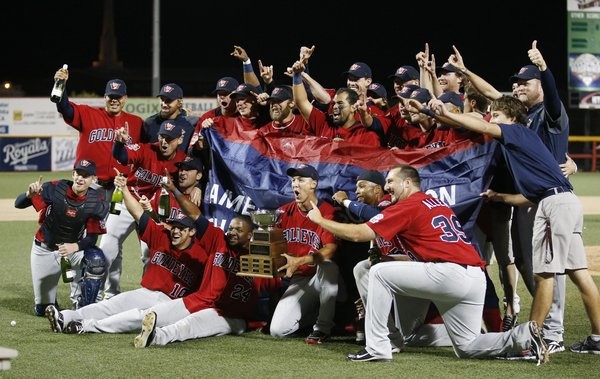 The Winnipeg Goldeyes celebrate after defeating the Wichita Wingnuts 8-3 in Wichita, Kansas to win the American Association Championship on Friday, September 14, 2012. (FERNANDO SALAZAR / THE WICHITA EAGLE) 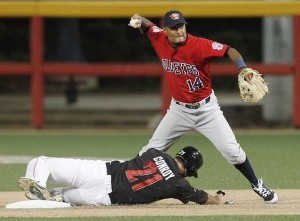 The Winnipeg Goldeyes won the 2012 American Association Championship Series after defeating the Wichita Wingnuts 8-3 on the road.

The Fish won three straight games in the best-of-five series to win their first title since 1994. It’s also the first title for any professional sports franchise in Winnipeg since that time.

The Goldeyes opened the scoring in a big way with a five-run second inning, as Luis Alen singled in Josh Mazzola, Mike Coles doubled in Alen, Amos Ramon singled in Coles and Chris Roberson doubled in Ramon and Price Kendall. Winnipeg belted out five hits in the frame and had the benefit of two errors, including one by Wichita third baseman Greg Porter that allowed Kendall to reach base.

The Goldeyes are scheduled to return home to Winnipeg on Saturday night.

A victory celebration has been planned for Sunday at 6 p.m. at Shaw Park. Doors open to the public at 5:30 p.m. and admission is free.

“We have the best fans in minor league baseball and they are a big part of this championship,” said Goldeyes GM Andrew Collier. “As an organization, we are looking forward to celebrating this great accomplishment with them.”

Following the formal part of the event, fans will have an opportunity to get autographs and take pictures with the players.

— With files from Scott Unger