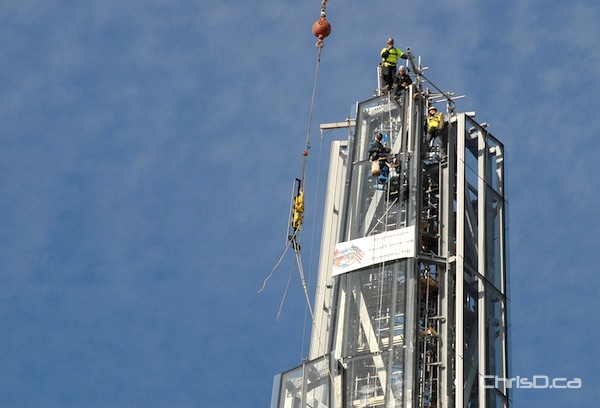 The last piece of glass is installed atop the Canadian Museum for Human Rights at The Forks on Thursday, September 20, 2012. (STAN MILOSEVIC / CHRISD.CA) 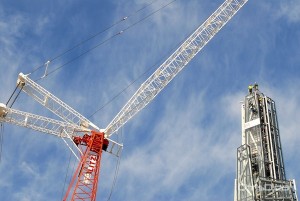 A crane assists with the installation of the final piece of glass on the Canadian Museum for Human Rights on Thursday. (STAN MILOSEVIC / CHRISD.CA)

A milestone was met on Thursday at the Canadian Museum for Human Rights as crews installed the final piece of glass.

After being delayed one day due to strong winds on Wednesday, a crane lifted the final pane up to the top of the structure shortly after 10 a.m. Each piece of glass has been custom cut and is precisely fitted into its proper place to complete the unique design.

“The architectural sketches we’ve become so familiar with are no longer just a vision,” said Stuart Murray, the museum’s president and CEO. “With the last piece of glass in place, what was once an artist’s drawing today emerges fully realized.”

Construction crews working at the site have been installing the 1,669 pieces of glass for the past year. Thursday’s installation completes the Tower of Hope’s glass spire, which is 78 feet taller than the Golden Boy atop the Manitoba legislature.

The $351-million museum, originally scheduled to open this year, is now slated to open in 2014.