Local Push to Get Paul Henderson in Hockey Hall of Fame 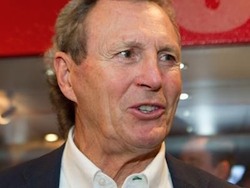 A Winnipeg-based campaign is underway to get former NHL player Paul Henderson into the Hockey Hall of Fame.

Henderson drew national pride when he beat Vladislav Tretiak with 36 seconds left to win Game 8 over the Soviets in the historic 1972 Summit Series.

A “Henderson in the Hall” online campaign has been launched by Canada’s History, where a signed, one-of-a-kind print of Henderson and the 72 Summit will be auctioned off. All proceeds will go to support education programs including Canada’s History Young Citizens and Kayak Illustrated History Challenge for Children.

Fans from across the country can sign the petition until September 28, or bid in the online auction to get ‘Henderson on the Wall.’