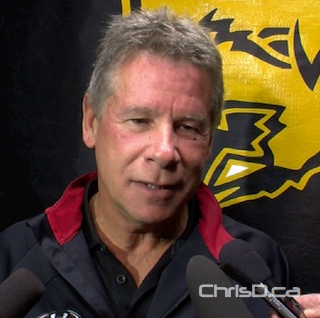 The University of Manitoba Bisons will look for redemption on Saturday after their first loss of the season last week.

The No. 8-ranked football team (2-1) suffered a loss to the Calgary Dinos during their Homecoming Game 33-12.

As the Herd regroups before hosting the Alberta Golden Bears, head coach Brian Dobie says it’s the team’s running game that needs the most improvement.

“Our running game hasn’t done anything. The last two weeks it’s been… not very productive at all. That’s a real issue with our offensive line and our backs, and we need to make that happen against Alberta to put ourselves in a good position.”

The single meeting of the season between the two teams will give Manitoba an advantage, as Alberta (0-3) has yet to win a game this season.

“He’s an old Bison and he’s now the enemy,” Dobie said with a smile. “I know that they need a win just as badly as we do. They are winless at this point and they really need to come in here and beat us.”

Kickoff is Saturday at University Stadium (1 p.m.) and will be broadcast live on Shaw TV, online at CanadaWest.TV, and on UMFM 101.5.