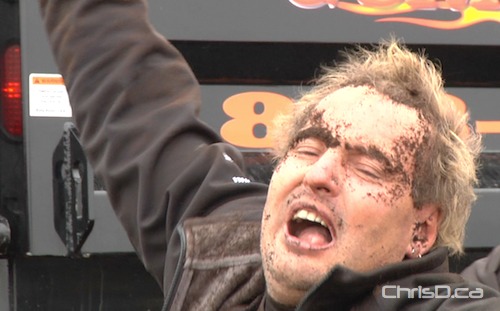 Winnipeg escape artist Dean Gunnarson is tempting fate yet again by re-attempting to escape from a speeding bullet coaster train.

Gunnarson is currently in China, where on Wednesday he’ll try to leap out of the way of the 135 km/h-train as it approaches him on the tracks. Gunnarson will be handcuffed, chained, and padlocked around his arms and neck, and then chained to the tracks.

The last time he tried this very stunt, Gunnarson was badly injured after breaking his foot and receiving internal bleeding.

“If I told I wasn’t nervous while being chained down to those roller coaster tracks I would be lying,” Gunnarson said in an e-mail. “It is absolutely terrifying how fast this coaster launches off. It is like a fighter jet taking off from an aircraft carrier and I am in its path!”

If Gunnarson is successful, he will receive the award of “Best Escape Artist 2012” from the International Magicians Society.