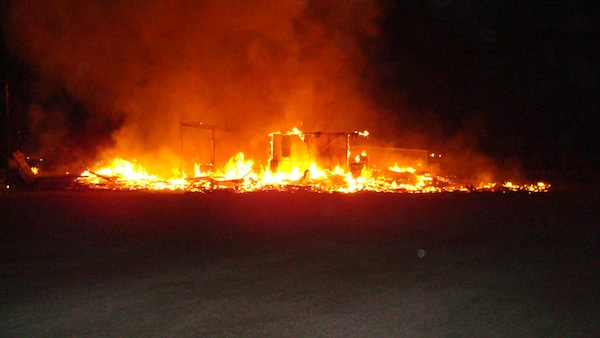 Flames engulf the J.A.R. Community Centre in Crane River on Monday, September 24, 2012. Police are investigating the fire as an arson. (RCMP HANDOUT)

Arson is being blamed as the cause of a fire that destroyed the J.A.R. Community Centre in Crane River, Manitoba.

Firefighters were called to the blaze at about 11:30 p.m. on Monday to find the building completely engulfed in flames.

A damage estimate isn’t available, but the centre won’t be able to be salvaged.

No one was in the building at the time and RCMP continue to investigate.

UPDATE: Monday, October 1, 2012 — Two male youths from Crane River First Nation, aged 14 and 15, have been charged with arson and will appear in Dauphin court on November 14.