Home » News » One Dead in Shooting at Salisbury House on Pembina

One Dead in Shooting at Salisbury House on Pembina 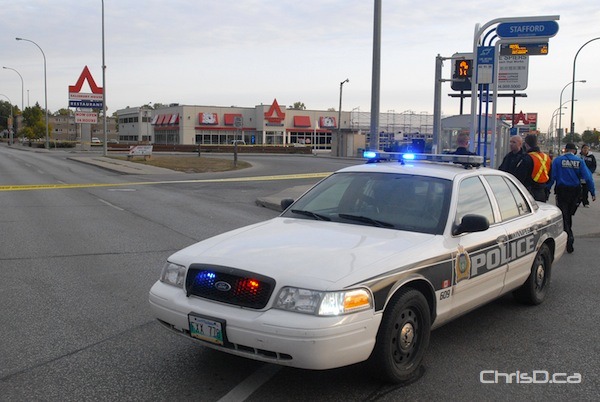 One man is dead and another remains in hospital following a shooting at the Salisbury House on Pembina Highway at Stafford Avenue early Thursday morning.

Shots rang out at around 3 a.m. in the recently remodeled restaurant, located at 759 Pembina Highway.

Winnipeg police say a male suspect fired multiple shots in what appears to be a targeted shooting. Both men were taken to hospital, where one later succumbed to injuries while the second victim has been upgraded to stable.

Winnipeg police had several area streets blocked off to traffic as they investigated, but had reopened the area just before 9 a.m. Witnesses reported seeing a gun laying on the ground near the scene, which police had marked as evidence.

As many as seven bullet holes could be seen in the windows of the restaurant.

While an arrest has yet to be made, police say “there are no concerns for public safety.”

UPDATE: Friday, September 28 — The deceased victim has been identified as Jeffrey Michael Lau, 23. The second victim, a 22-year-old man, has been upgraded to stable condition.