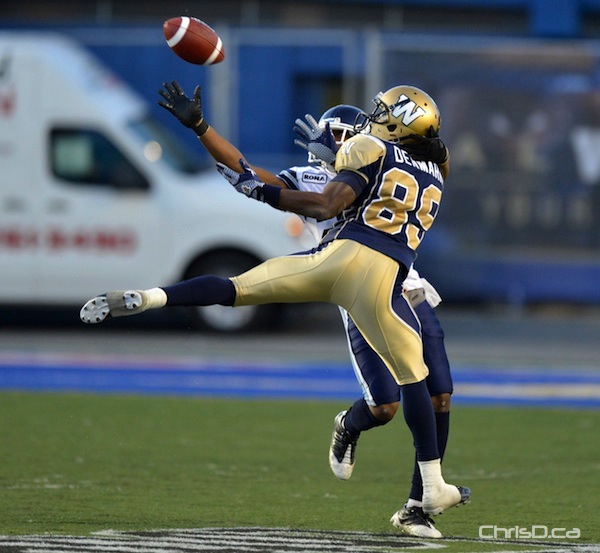 WINNIPEG — Call it a regular installment of the second act of the Buck Pierce Show.

For the 23rd time in 60 career CFL starts at quarterback, Buck Pierce left the game due to injury. And similarly to many of those instances, the Winnipeg Blue Bombers emerged on the losing end of said game.

The Toronto Argonauts came into Canad Inns Stadium on Saturday night and handed the Bombers their tenth loss of the season in front of 27,169 — a 29-10 shellacking that appears much less severe on the scoreboard than it did in actuality on the field.

“With the amount of turnovers and penalties we had tonight, we won’t beat a pee-wee team,” said veteran Winnipeg receiver Terrence Edwards. “The team that gets the most turnovers usually wins the game.”

The Bombers committed seven total turnovers to Toronto’s one, including three lost fumbles and four interceptions, three of which came off the hands of backup Joey Elliott (20-for-30, 173 yards) who entered in relief of Pierce (8-for-13, 120 yards, 1 TD, 1 INT) to start the second half.

Pierce was pummeled by Argos linebacker Brandon Isaac late in the first quarter, taking a helmet to the chin that opened a wound and knocked the quarterback out for several plays. Pierce returned, but was held out “for the remainder of the game for precautionary reasons” when it was learned that he was experiencing headaches.

But with his checkered history of injuries and suspected concussions, the big question posed at Blue Bombers head coach Tim Burke was if the team can move forward with Pierce as their quarterback.

“I think so,” said Burke. “He’s the best quarterback we have… It’s obviously frustrating, but I thought the way our offensive line has been playing that they’ve kept the quarterback pretty clean for the most part.”

But the player on offence who has been through thick and thin over his six seasons as a Bomber feels it may be a hinder.

“You see all the good teams have their number one guy in there,” added Edwards. “They’re not rotating quarterbacks… I don’t care what league you’re in, it’s going to be tough to win games when your number one quarterback is in and out of the lineup. That’s been us for two years now.”

The Blue and Gold continue their tumultuous 2012 campaign, unable to string together consecutive wins and are firmly planted in the basement of the both the CFL and the East Division. Their next two matchups come against a pair of 8-5 clubs; first in Montreal against the East Division-leading Alouettes on Monday, October 8 before returning home on Saturday, October 13 to face the Calgary Stampeders.