U of M Students Push Bed Along Trans-Canada Highway 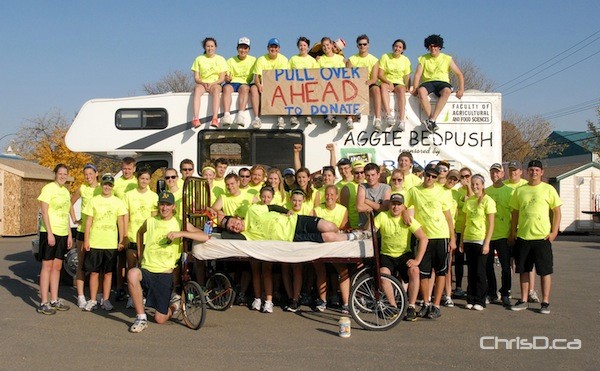 University of Manitoba students pushed a bed along the Trans-Canada Highway this past weekend.

The annual Aggie Bedpush began in Brandon on Saturday and will end up on the U of M’s Fort Garry campus by about noon today.

Students from the FASO (Faculty of Agriculture Students’ Organization) are pushing the bed in the 31st annual event to raise funds for the Children’s Wish Foundation.

A custom-made, burgundy steel bed frame on wheels is pushed more than 200 kilometres every year for a different charitable cause. A motor home accompanies the students to act as a rest/refreshment centre, but the bed doesn’t stop moving until it reaches its final destination of the day.

The bed reached MacGregor, Manitoba on Saturday, and St. Francois Xavier by the end of Sunday.

Donations can still be made until November 23 to the cause by cheque to the “Children’s Wish Foundation of Canada.” Tax receipts will be issued for donations over $20, which can be mailed to FASO, 160-66 Dafoe Road, Winnipeg, MB R3T 2N2.