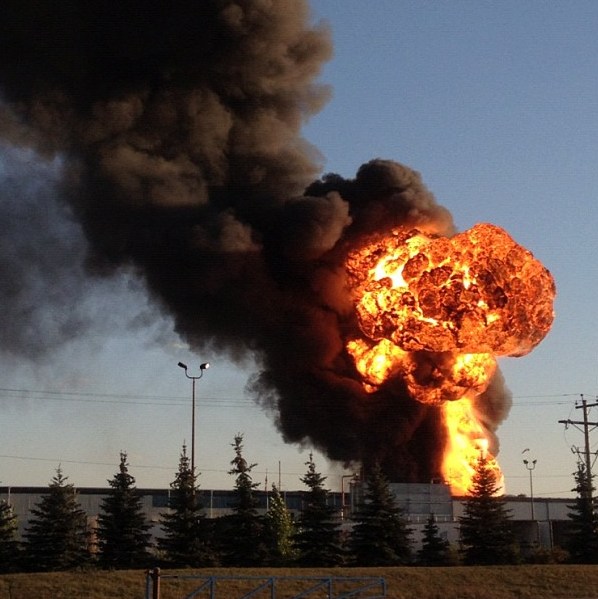 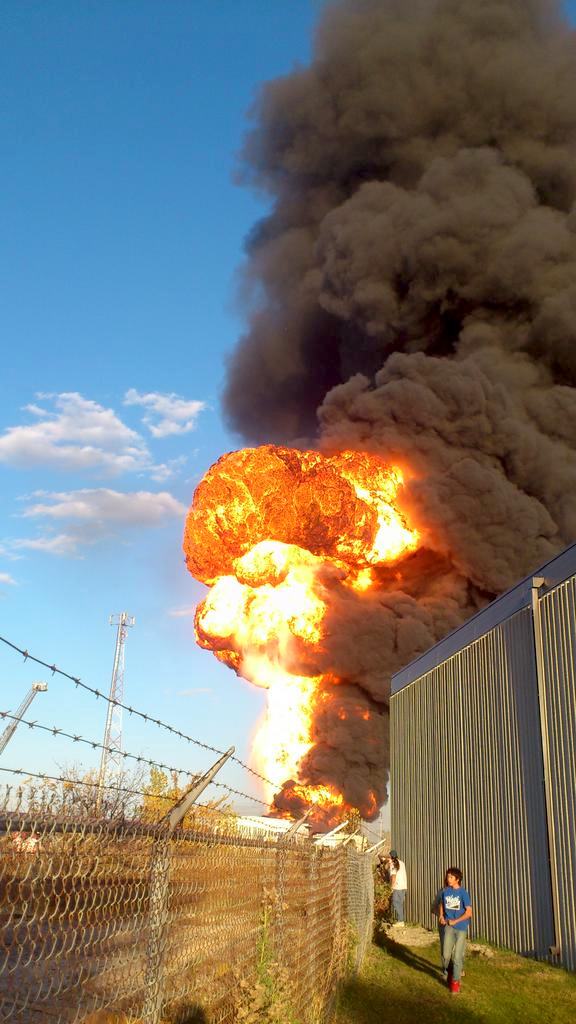 WINNIPEG — Firefighters battled a large-scale blaze in St. Boniface at a biodiesel plant late Monday afternoon and into Tuesday morning.

Crews were called to Speedway International at 40 Nicolas Avenue at about 5:30 p.m.

Dark plumes of smoke could be seen billowing from the area city-wide.

Witnesses at the scene said they could hear large explosions as balls of fire shot up into the air.

Firefighters were pulled back as flames grew too dangerous to safely contain. A buffer zone of 2,400 feet was formed around the facility.

CN rail cars sitting on a track nearby were doused with water before being moved away as a preventative measure.

At around 9 p.m., a specially-designed “crash truck” was brought in from the James Richardson International Airport. The truck sprays foam from a large arm that extends several metres in the air.

Winnipeg police urged the public to stay away from the scene for their own safety. Nearby residents were evacuated to waiting Winnipeg Transit buses while they waited until it was safe to return. At about 12:30 a.m., homeowners were given the all-clear by the city to make their way back.

Police said in a statement, “For the safety of the public and to insure officers and fire personnel effectively perform their duties, motorists and pedestrians are requested to avoid the area until further notice. Emergency personnel have noted that some members of the public have made their way toward the scene due to curiosity. These individuals are requested to leave the area immediately.”

A staging area for emergency personnel was designated at the Tim Hortons at the corner of Archibald Street and Marion Street.

Numerous roadways in the surrounding area were closed to all traffic.

By Tuesday morning, the majority of the fire had been extinguished, but hot spots were still smouldering. Streets in the immediate area of Speedway International have reopened, but a small number of fire crews remain at the scene.

Damage is estimated at $15 million.

An explosion at Speedway International on Nicolas Avenue sends flames shooting through the air in St. Boniface on Monday, October 1, 2012. (NIC AUDETTE / TWITTER)