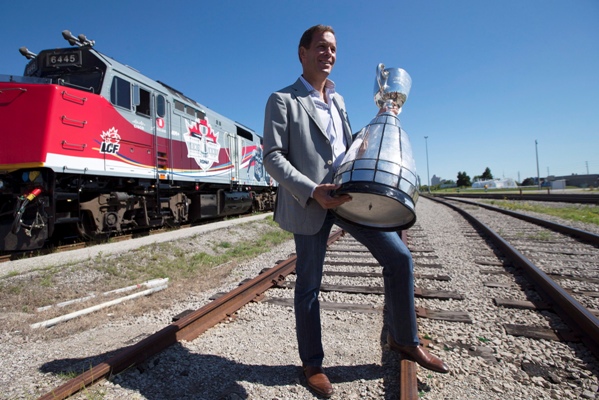 CFL Commissioner Mark Cohon poses for a photo with the Grey Cup in front of a train which will tour with the trophy across Canada. (MICHELLE SIU / THE CANADIAN PRESS / CFL)

The CFL’s coveted trophy will be in Manitoba for a four-day tour beginning on Wednesday.

In celebration of the 100th Grey Cup anniversary, the league’s trophy is travelling across the country and making stops throughout each province for fans to catch a glimpse and join in the festivities. The Grey Cup will be in Manitoba from October 3 through to October 6.

“The Grey Cup really belongs to every Canadian, so our goal for this special year of the 100th Grey Cup game is to bring it to as many cities, towns and Canadians as we can,” said Mark Cohon, commissioner of the Canadian Football League in a release.

To find out where to see the Grey Cup, visit BlueBombers.com.