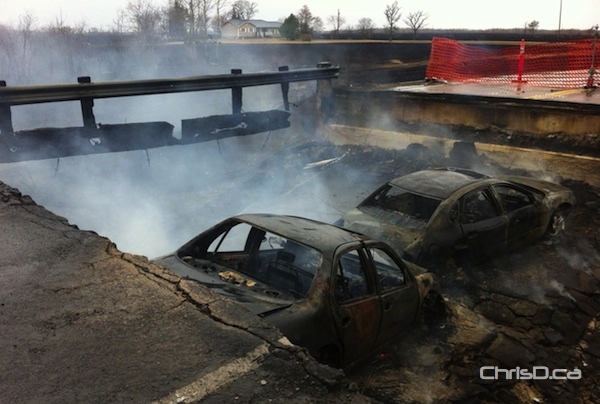 Burnt-out vehicles sit in a pit after the bridge leading into Vita, Manitoba collapsed amid fire on Tuesday, October 2, 2012. (STAN MILOSEVIC / CHRISD.CA)

Calmer winds and cooler temperatures in southeast Manitoba have been a blessing for crews fighting the wild fires in that portion of the province.

Firefighters worked overnight to contain a fire near Vita that burned down four homes on Tuesday. Area residents were allowed to go back to their homes at around 6 p.m. yesterday.

About 20 residences outside Vita in the Rural Municipality of Stuartburn remain evacuated today.

A state of local emergency remains in effect for the community of Ross in the RM of Tache. Forty homes were evacuated overnight to Ste. Genevieve due to smoke and fire concerns but residents are expected to be allowed to return later today. No injuries have been reported.

Premier Greg Selinger took an aerial tour of the area this afternoon and met with local officials. Selinger said any damage not already covered by homeowners’ insurance will be eligible under the province’s emergency disaster assistance fund.