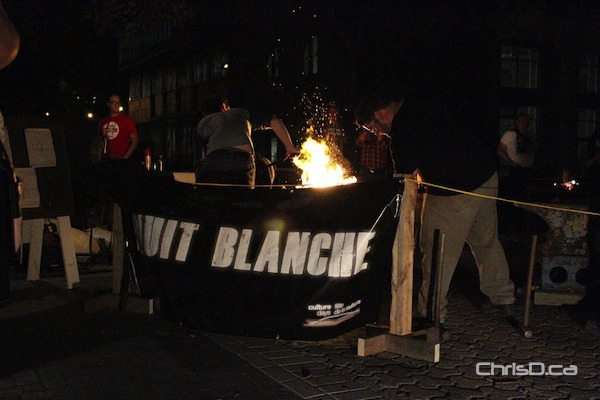 A performance of Matt Jenkins’ ‘Forging by Night’ is held in Old Market Square on Saturday, September 29, 2012. (HOWARD WONG PHOTO)

Officials with the WAG kicked off their party as part of Culture Days and Nuit Blanche, in conjunction with the opening of the new Winnipeg Now exhibit.

Comedian Al Simmons, magician Brian Glow and filmmaker Guy Maddin were all part of the festivities.

“This is a very special year for us and we are very pleased that so many Winnipeggers chose to celebrate with us,” said WAG executive director Stephen Borys. “It was tremendously exciting to see the gallery come alive with thousands of people of all ages — we couldn’t have asked for a better launch to our centennial anniversary year.”