Juno Awards Confirmed for Winnipeg in 2014 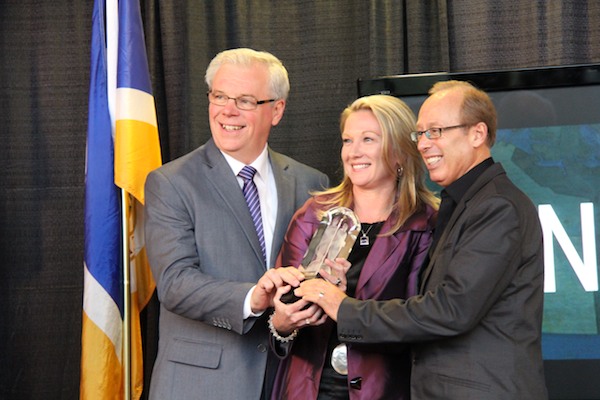 Melanie Berry, president and CEO of the Canadian Academy of Recording Arts and Sciences (CARAS), holds a Juno award in between Premier Greg Selinger and Mayor Sam Katz during an announcement at MTS Centre on Thursday, October 4, 2012. (BERNICE PONTANILLA / METRO WINNIPEG)

As we first reported on Wednesday, the city has been chosen to host the 43rd annual spectacle of Canadian musical talent at MTS Centre.

It’s the second time Winnipeg will host the event, which was first held here in April 2005.

The Juno Awards will be celebrated during an entire week, March 24-30, filled with special events and galas leading up to the CTV broadcast on the 30th.

The announcement was made Thursday in the atrium of MTS Centre by representatives from the Canadian Academy of Recording Arts and Sciences (CARAS), Winnipeg Mayor Sam Katz, Premier Greg Selinger, and 2014 Winnipeg host committee co-chairs, Carole Vivier and Kenny Boyce.

“Renowned for its music icons, exciting festivals, and home to the Jets, Winnipeg is a natural stop for Canada’s Music Awards,” said Melanie Berry, president and CEO of CARAS and the Juno Awards. “Winnipeg has cultivated artists that have become part of our national identity — from Neil Young and The Guess Who to Chantal Kreviazuk and Lenny Breau. Winnipeg’s enthusiastic music fans have helped launch numerous rock ‘n’ roll legends, and we’re excited for what’s in store when we return in 2014.”

The economic impact of the awards is expected to generate $10 million for the local economy.