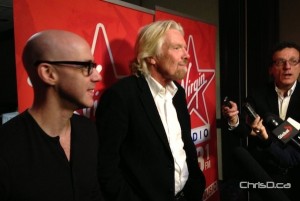 Sir Richard Branson, founder of the Virgin Group, speaks to media following his address to the Winnipeg Chamber of Commerce at the Fairmont Winnipeg on Friday, October 5, 2012. (CHRISD.CA)

One of the world’s richest men was in Winnipeg on Friday to speak to a packed room of local business leaders.

Sir Richard Branson, founder of the Virgin Group, spoke to a sold-out crowd of 800 at the Fairmont Winnipeg in an address organized by the Winnipeg Chamber of Commerce and 103.1 Virgin Radio.

Branson flew in Thursday night in a private jet to James Richardson International Airport, where he later made a stop at the King’s Head Pub and Eatery.

Branson, with a net worth of about $4.2 billion, spoke for roughly 45 minutes as part of a question and answer session with Virgin Radio host Ace Burpee.

Proceeds of more than $300,000 from the afternoon will be shared with Resource Assistance for Youth (RaY), one of Branson’s supported charities. The entrepreneur announced a program earlier this week called Phones For Change, which will help at-risk and homeless youth in Winnipeg and Vancouver access Virgin Mobile phones and plans while educating them on the importance of financial management and how to escape the cycle of debt.

Four trips to Branson’s Necker Island were auctioned off for $30,000 each. One of the successful bidders was Hartley Richardson, president and CEO of James Richardson and Sons.