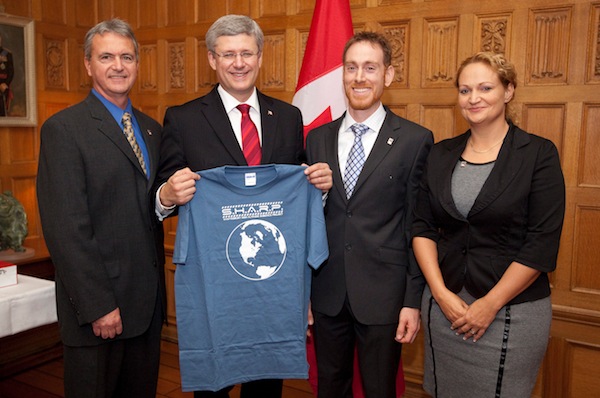 Three teachers from Shaftesbury High School have been honoured by Prime Minister Stephen Harper for their work in an extracurricular science program involving high-altitude balloons.

Rob Striemer, Adrian Deakin, and April McKnight met with Harper during a ceremony on Parliament Hill last Wednesday. The Winnipeg trio received certificates of excellence for their work with the Shaftesbury High Altitude Robotics Project (SHARP).

As we told you about last October, Shafesbury students launched a balloon into outer space to study the skies with a radio controlled aircraft. Since the program’s inception in 2009, a mission control ground station has been created and future launches are in the works. The most recent flight reached altitudes of more than 126,000 feet. The high-altitude balloons are also capable of capturing pictures of outer space.

SHARP 3 will launch from Elkhorn, Manitoba on Tuesday, October 23.