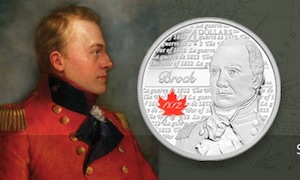 Major-General Sir Isaac Brock is shown in a new coin being circulated by the Royal Canadian Mint. (HANDOUT)

A new 25-cent coin will begin circulating today commemorating the 200th anniversary of the War of 1812.

The Royal Canadian Mint’s boutique at 520 Lagimodiere Boulevard will host a coin exchange for the public from 9 a.m. to 5 p.m.

Limited to a mintage of 10,000 coins world-wide, the colour-enhanced coin is going into circulation on the day Major-General Sir Isaac Brock died at the Battle of Queenston Heights.

The Mint is also issuing a $4 fine silver collector coin featuring the stately effigy of the “Hero of Upper Canada.”