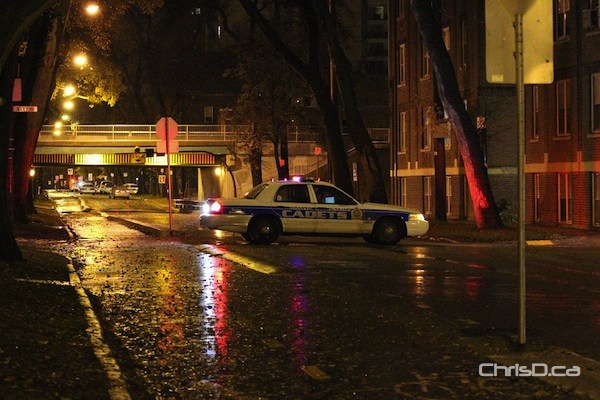 A Winnipeg police cadet cruiser blocks a portion of Assiniboine Avenue after a man barricaded himself in an apartment suite with a gun on Wednesday, October 17, 2012. (HOWARD WONG PHOTO)

Winnipeg police surrounded the apartment building at about 5 p.m. Wednesday afternoon after a 47-year-old man barricaded himself in a 16th floor suite with a gun.

A portion of the building was evacuated as dozens of police cruisers lined the street.

Police say the man pointed a rifle in the direction of one of the officers, causing them to retreat.

Negotiators were brought in and the man was taken into custody without incident at about 12:30 a.m.

Police seized an air soft long barrelled rifle, including several knives, brass knuckles and a collapsible baton from the scene. There were no reported injuries and no shots were fired.

The man is facing several charges, including failing to comply with conditions of an undertaking.

← Previous: Metis Culture Celebrated at U of W on Friday Next: Top Cop Nominees Narrowed Down for Award →
Tags: Crime | Winnipeg Police