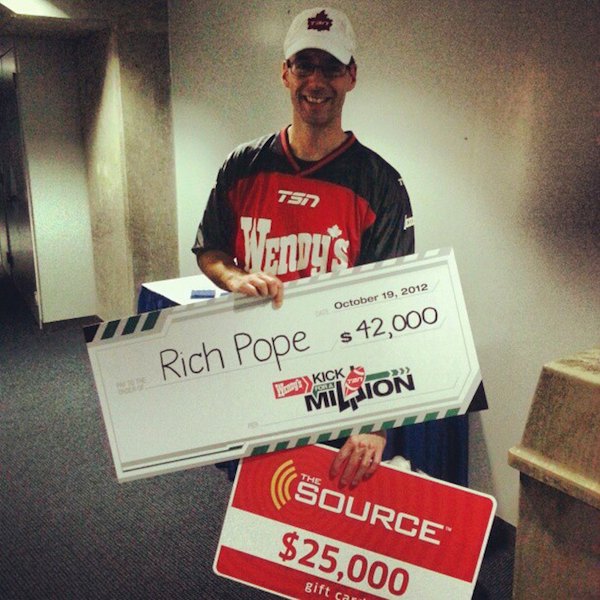 Rich Pope of Winnipeg holds up a cheque and a gift card from his winnings during the TSN Wendy’s Kick For A Million event in Toronto on Friday, October 19, 2012. (TORONTO ARGONAUTS / TWITTER)

A Winnipeg man has a hefty haul of prizes to bring back from Toronto after scoring big on Friday night.

Rich Pope was a finalist in the TSN Wendy’s Kick For A Million event at Rogers Centre during halftime between the Winnipeg Blue Bombers and Toronto Argonauts.

Pope took home a $25,000 gift card for The Source, a new fully loaded Nissan Titan Pro-4X pickup truck valued at over $60,000, and $42,000 in cash. He unfortunately missed the 50-yard attempt for $1 million by kicking the ball wide and to the right, but still walked away satisfied.

Pope had some stiff competition going into the contest. He was one of more than 14 million entries along with only three others chosen to qualify for a chance to play.