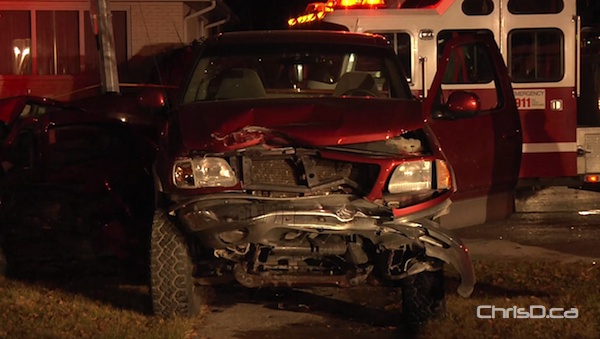 A pickup truck sits damaged after a two-vehicle crash at Polson Avenue and Airlies Street on Saturday, October 20, 2012. The driver of the truck fled, while the driver of the second vehicle was taken to hospital in critical condition. (WPGCAMERAMAN / CHRISD.CA) 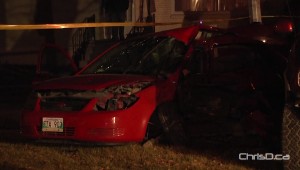 The driver of this Chevrolet Cobalt was critically injured after a two-vehicle crash on Polson Avenue Saturday night. (WPGCAMERAMAN / CHRISD.CA)

One man is in critical condition following a two-vehicle crash Saturday night.

The accident happened at about 11:40 p.m. at the intersection of Polson Avenue and Airlies Street.

Winnipeg police say a Chevrolet Cobalt was struck by a Ford F-150 pickup truck. The male driver of the Cobalt was transported to hospital in critical condition, while an adult male passenger sustained non-life-threatening injuries.

Police are looking for the driver of the F-150, who they say fled the scene on foot. 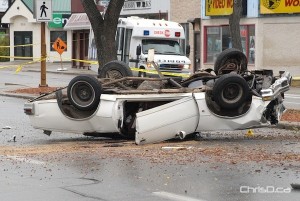 A vehicle rests on its roof after hitting a tree on Henderson Highway, Sunday, October 21, 2012. (STAN MILOSEVIC / CHRISDCA)

Emergency crews were kept busy, later responding to a single-vehicle crash in the 200 block of Henderson Highway at about 4:05 a.m. Sunday morning.

Police say a man was driving his vehicle southbound on Henderson when it lost control and struck a tree, coming to a rest on its roof.

The driver is in critical condition in hospital. 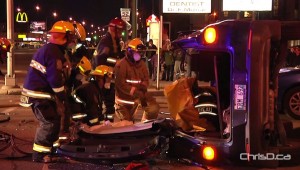 The driver of a vehicle needed to be extradited by emergency crews after rolling at the intersection of Main Street and Redwood Avenue. (WPGCAMERAMAN / CHRISD.CA)

Earlier on Saturday, a woman had to be extradited from their vehicle after it rolled on Redwood Avenue at Main Street at about 6:30 p.m. Northbound Main Street was closed to traffic for several hours while the scene was cleared. No word on what led to the crash.