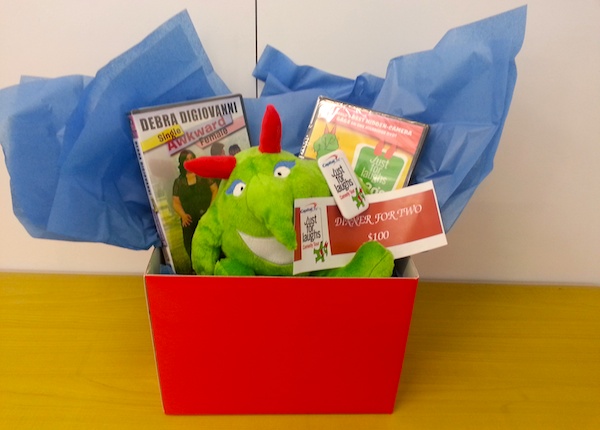 The Capital One Just For Laughs Comedy Tour is making a stop in Winnipeg on November 13, and to celebrate, ChrisD.ca is giving away a loaded prize pack.

We’ll choose one lucky winner at random to win the following prizes:

How do I enter?

Simply fill out the form below. Good luck!

Laughter is infectious on the Prairies, with 18% of Facebook users likely to share jokes with friends on their pages.

That’s exactly where the winning will continue, as those on Facebook have yet another chance to win prizes as Just For Laughs approaches. By visiting the Capital One Facebook page, you can select your favourite comedian by watching a series of videos. You’ll then be able to enter to win an LG entertainment bundle (valued at approximately $2,500). There will also be fun prizes and gift cards up for grabs throughout the contest (nine prize packs valued at approximately $125 to $145), so be sure to visit often. The Stand Up Stand Off contest runs until November 14, 2012.

Tickets for the Just For Laughs Comedy Tour, being held at the Pantages Playhouse Theatre next month, are on sale now at Ticketmaster for $54.25.

One entry per person. No purchase necessary. Open to Canadian residents (excluding Quebec) who have reached the age of majority in their province or territory. Enter the ChrisD.ca Just For Laughs Comedy Tour contest for your chance to win a Laughing All the Way to the Bank give away package worth approximately $125 CDN. Prize packs include a $100 gift card to a local restaurant, a Just For Laughs Gag DVD and a DVD featuring one of the tour’s comedians and a Just for Laughs mascot plush toy. Any part of the give away package may be substituted for one of equal or greater value. To enter, fill out the form above. Contest opens October 24, 2012 at 10 a.m CT and closes November 14, 2012 at 11:59 p.m. CT. Chances of winning depend on the number of eligible entries received. Skill-testing question required. Personal information is handled in accordance to this website’s privacy policy.