Wickenheiser and First Place Dinos in the City to Face Bisons 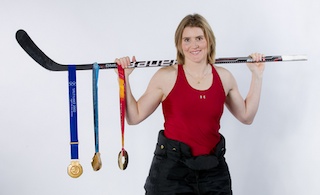 Olympian Hayley Wickenheiser and her Calgary Dinos hockey team are in Winnipeg this weekend.

The No. 1-ranked Dinos are defending CIS champions and will face the Manitoba Bisons in a two-game series at Max Bell Arena tonight and Saturday.

Puck drop both nights is 7 p.m.