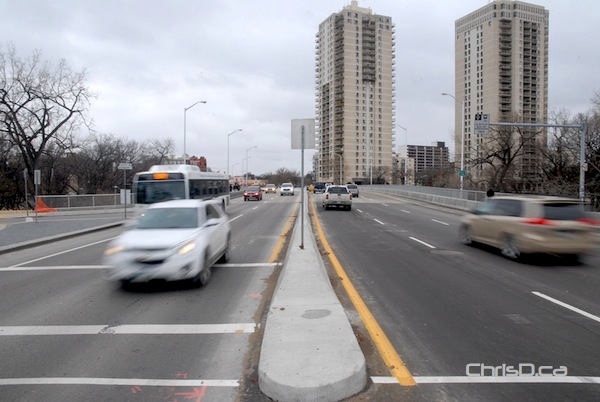 The Osborne Street Bridge was officially reopened Friday morning after an extensive refurbishment.

The bridge, which connects Osborne Village to the city’s downtown, sees about 42,000 vehicles travel over it each day above the Assiniboine River.

“The Osborne Bridge is one of Manitoba’s busiest routes for vehicle, cyclist and pedestrian traffic. Whether you’re in a car, on a bike or walking, the new, wider Osborne Bridge will get you where you’re going more safely and efficiently,” Premier Greg Selinger said during a ceremony at the corner of Osborne Street and Assiniboine Avenue.

The project came with a price tag of $16.8-million — cost-shared between the city and province — and began in the spring of 2011. It was completed on time and on budget.

Pedestrians who use the bridge will also notice works of art decorating it on their commute.

A partnership with the Winnipeg Arts Council saw artists Eduardo Aquino and Karen Shanski create a design titled “From Here Until Now.” It represents the two distinct neighbourhoods on each side of the Assiniboine River. The artwork can be seen on the bridge’s sidewalk, handrails, and gateway zones at both bridge entries featuring LED lighting.

← Previous: Wickenheiser and First Place Dinos in the City to Face Bisons Next: New Flyer's Electric Bus Gets $3.4M from Ottawa →
Tags: Traffic