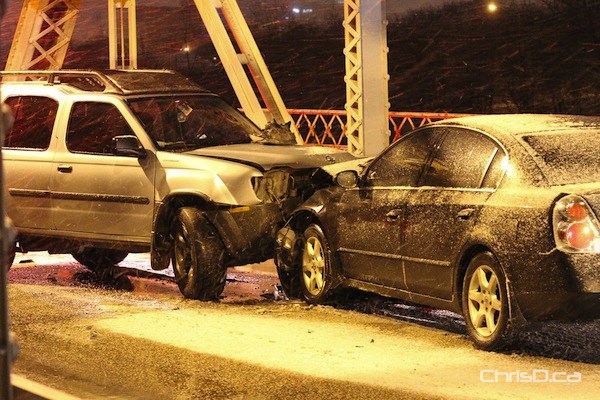 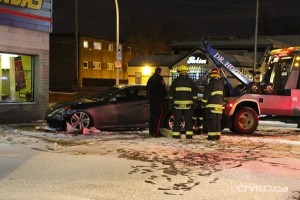 A two-door sedan is towed after breaking through a wooden fence and over a sidewalk in the 1300 block of Henderson Highway on Saturday morning. (HOWARD WONG / FOR CHRISD.CA)

Icy roads that caught some drivers off guard early Saturday morning likely played a role in several crashes in the city.

The first accident happened on the Louise Bridge at about 12:15 a.m. when an SUV and sedan collided head-on. Firefighters closed one lane of the bridge while they tended to the drivers and cleared the scene. One person was transported to hospital in stable condition.

Then at about 1:15 a.m., a vehicle lost control and drove through a wooden fence in the 1300 block of Henderson Highway. The driver crossed two lanes of traffic and jumped a sidewalk before hitting a Midas store and damaging a window. 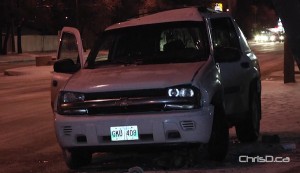 An SUV sheared off a hydro pole at about 3 a.m. at McPhillips Street and Stardust Avenue. Two people were in the vehicle at the time, while one man was later taken into custody by police. His female passenger was transported to hospital.

Emergency personnel then tended to a single-vehicle crash on Burrows Avenue at Battery Street at about 3:40 a.m. A minivan lost control and crashed into a tree. The driver refused medical attention. 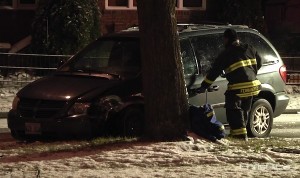 Eastbound Corydon Avenue was closed near Niagara Street at 4:30 a.m. when a minivan lost control and hit a parked SUV, which then took out a fire hydrant. The driver was taken to hospital with unknown injuries. 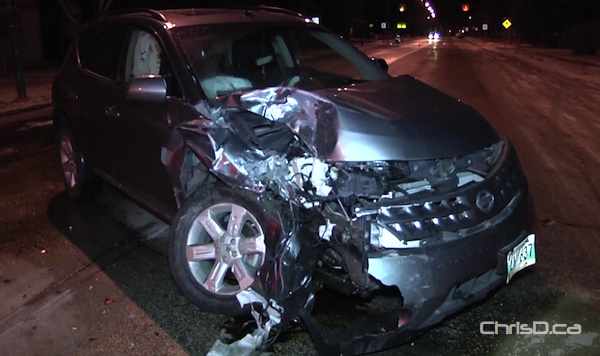