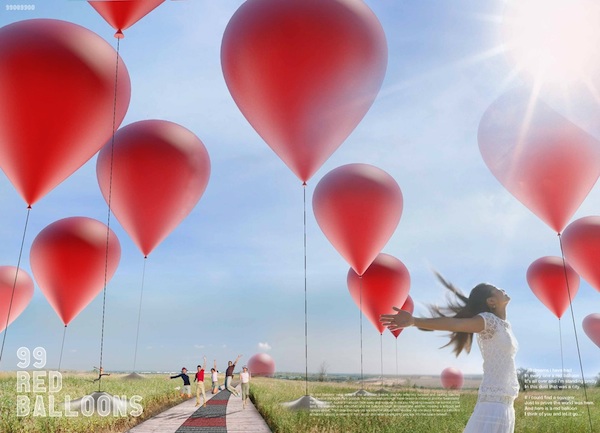 A Winnipeg urban design firm could soon be turning heads in New York with their unique work.

Nadi Urban Design Studio has proposed to float 99 giant red balloons above a former Manhattan landfill site. The art installation would generate clean energy while reminding people that something beautiful and productive can come out of garbage.

The Winnipeg “99 Red Balloons” plan was selected as one of the four best ideas in the world from 250 submissions and 39 countries through the Land Art Generator Initiative earlier this week.

Each balloon floating above the 2,200-acre landfill would be lined with hi-tech solar panels and would collectively produce enough renewable energy to power 4,500 homes a year. The balloons plan to be flown 100-feet above the ground and are 50-feet tall by 40-feet wide.

“Every major city has a former landfill site that can be a great public park and can capture clean energy — even the Brady Road Landfill or Kilcona Park,” said Nadi principal and founder Emeka Nnadi.

The University of Manitoba landscape architecture graduate returned to Winnipeg a few years ago after moving to Chicago to pursue his career. Upon returning to the city, he worked for Smith Carter Architects and Engineers before opening his own design firm.

“I’m proud to be a small part of Winnipeg’s positive evolution, and delighted to participate in the global challenge to make sustainability beautiful and even sometimes playful.”