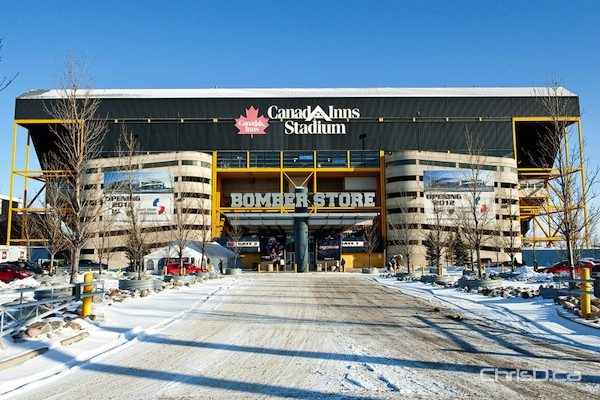 The Winnipeg Blue Bombers will play their last game ever at Canad Inns Stadium on Saturday. (TED GRANT / CHRISD.CA FILE)

The Winnipeg Blue Bombers will (for a second time) bid farewell to Canad Inns Stadium on Saturday — a place they’ve called home for 59 years.

The Blue and Gold will host the Montreal Alouettes in the regular season finale before moving to Investors Group Field across town next year. To celebrate a new era for the football club, several special events are planned for game day tomorrow afternoon.

The game will be celebrating the Canadian Football Hall of Fame as 2012 inductees and Blue Bomber greats, Milt Stegall and the late Tyrone Jones will be inducted into the prestigious hall along with Damon Allen, Jack Abendschan and Eric Lapointe in the player category and Senator David Braley and Peter Connellan in the builder category. The players and builders will be honoured at halftime, with Milt Stegall speaking on behalf of all of them.

A brief autograph session with the inductees is set for 12 p.m. outside the Bomber Store before the 2 p.m. kickoff.

A closing ceremony with members of the football club, current players and alumni will happen at midfield following the game. A brief tribute video and fireworks display are also planned for fans. Blue Bomber and CFL Hall of Famer Joe Poplawski will speak before shutting the lights off at the stadium.

Want to own a piece of Canad Inns Stadium? The Blue Bombers are holding an asset sale.