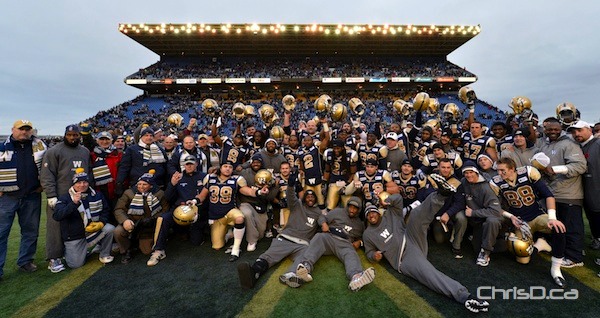 Winnipeg Blue Bombers players and alumni gather on the field after their last CFL football game at Canad Inns Stadium against the Montreal Alouettes on Saturday, November 3, 2012. (FRED GREENSLADE / REUTERS)

WINNIPEG — It was the last hurrah at the ol’ relic known as Canad Inns (formerly Winnipeg) Stadium on Saturday afternoon, as the Winnipeg Blue Bombers closed out their year — and 60 seasons at the grounds at Polo Park — with a 19-11 win over the Montreal Alouettes in front of an announced attendance of 26,907.

It was surely a bittersweet victory to wrap a tumultuous 2012 campaign that saw the Blue and Gold start 0-4, fire their head coach, get blown out by scores of 52-0 and 44-3 in a matter of three games, and somehow finish the year 6-12 — tied for last in the East with Hamilton and out of the playoffs — and just out of the cellar by way of a tiebreaker.

“I really feel good for the players that they were able to go out on a winning note,” said Winnipeg head coach Tim Burke who had the ‘interim’ prefix removed from his official title earlier in the week. “I think it’s a good, positive step going into next year. The vast majority of these guys are going to be the bulk of the team, and it’s good for them to end on a positive note that we can go into the next year feeling good about ourselves.”

Burke also feels finishing the season 4-3 is a significant accomplishment.

“I think it shows that there’s a lot of character there. There’s guys who have ability to play and beat teams. We won two really tough games on the road (in Montreal and Toronto) against two good opponents.”

“It’s huge,” said veteran safety Ian Logan of finishing 2012 with a win. “We’ve already started talking about the next season, building on what we’ve done this year and heading into the next season flying. This win is the first step towards that.”

“I certainly hope that this is a look to the future a little bit and give our fans some hope,” said quarterback Justin Goltz who entered on a full-time basis late in the game and went 3-of-5 for 30 yards passing, and added 32 yards rushing and a touchdown.

“We’ve got the greatest fans in the CFL, and they’ve been through a lot. Not only the rollercoaster of the last three years with the stadium opening and stuff like that. I just hope that our fans see that the future is bright. We’ve got a great core of players here, and I think it was a great decision to keep (general manager) Joe Mack and Tim Burke around for the future and have some consistency around here, because that’s what we need.”

President and CEO Garth Buchko and the Blue Bombers board clearly agree as they’re doubling down on their bets, and 2013 will be very telling of several staffers’ fates within the organization.