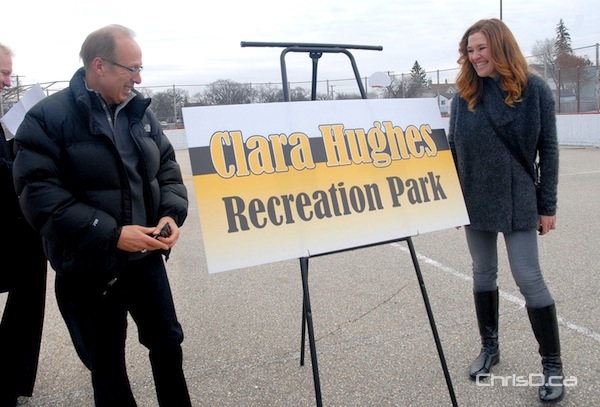 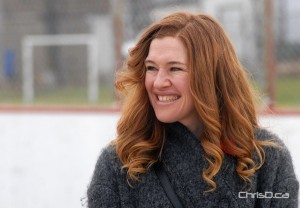 Clara Hughes attends a news conference to announce the naming of a recreation park in her honour on Saturday. (STAN MILOSEVIC / CHRISD.CA)

A new recreation facility in Elmwood will bear the name of a Winnipeg Olympian.

Clara Hughes Recreation Park, located at the site of the former Kelvin Community Centre, was announced Saturday by Mayor Sam Katz and Hughes herself.

The park will provide area youth with a place to go to be active and participate in sport.

“I’m honoured that the City of Winnipeg is naming this recreational space after me,” Hughes said.

“I believe that getting out and moving is important for both physical and mental health, so it’s exciting to think that young people will be skateboarding, playing basketball and hockey, and even tobogganing in a park bearing my name.”

Hughes was inducted into the Manitoba Sports Hall of Fame on Saturday evening.

Construction will begin shortly, with the majority of the work scheduled for completion in the spring of 2013.

On October 25, the city and province announced a $600,000 joint contribution towards the redevelopment of the park.