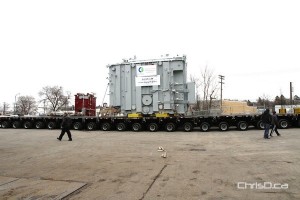 Valued at more than $5 million each, the transformers are being moved from their Winnipeg factory to Hydro’s Riel Station to make improvements on its 500,000-volt line linking Manitoba to Minnesota.

The journey will take three nights to travel 144 kilometres and use a special 320-tire self-propelled modular trailer (SPMT). The route has been carefully planned to avoid tight city streets and narrow overpasses as the transformers leave the Fort Garry area. A similar trailer was recently used to transport space shuttle Endeavour through the streets of Los Angeles

Six semi-trailers are also required to move the accessories, such as bushings, coolers and other ancillary equipment, needed to complete each transformer once it is on site.

The latest on any road closures will be available by calling 511 or visiting MB511.ca. The move will begin at 8 p.m. tonight.